Home > Blog > Momofuku Ando and His Instant Noodles,Not Ours

Momofuku Ando and His Instant Noodles,Not Ours 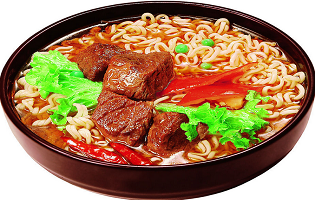 Nowadays,as a kind of popular food,instant noodles are produced by instant noodle machines.But talking about the origin of instant noodles,they were created after a pretty long and tough period.And for the great contributions made by the creator,we should never forget that history. 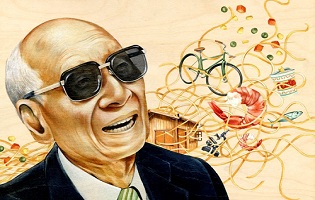 Instant noodles origin from Japan,and the creator was named Momofuku Ando,who was the founder of Japan Nissin Food Company.
Idea:
In 1959,Momofuku Ando managed his small food workshop as usual.Even though his workshop was pretty small to draw much attention,he was a man of active thoughts and bigger ambitions.He was always thinking about the question of how to get his own business bigger and better.
God always show appreciation for those who have been prepared.He took trolley bus everyday.He often saw the phenomenon that many people waited in line in front of the restaurant beside the station to eat hot noodles.And one day,an idea suddenly hit him:if I can make a kind of noodles that “are edible just after be rushed by hot boiled water”,maybe a lot of people will come to by my noodles.Therefore,this idea was determined to be a subject of invention in his mind.
Come true:
You have an idea,you gotta change it into action to realize it.Momofuku Ando immediately buried himself into invention tests.Many people expressed their doubts,but he didn’t care.He bought a doughsheeter to make ideal noodles.To realize the features of ”convenience and simplicity”,he thought of the method of frying.Thus he could get the noodles dry very quickly and make them easy to maintain.And the method proved effective to be able to make noodles more delicious.He also invented the method of adding seasoning to make noodles more delicious.
After that,with three years of hard work,he finally worked out to have produced “instant chicken noodles”.In 1962,his Nissin Company obtained the patent of the technology of producing instant noodles.The new product began to get into the market and gradually obtained many customers.
Unexpected advertisement:
Every new product will experience four stages of the market cycle which are inventing,rising,becoming mature and declining.After several years of development,the sales volume increased constantly.Meanwhile,they came up with the idea that pay more attention on travelers.To expand this part of market,the company invented bowl-type instant noodles to provide convenience for people who travel outside.But this new kind of product wasn’t enough accepted by consumers and the market.Because the price was three more times than bag packed noodles.The dealers didn’t would like to sell such products.So the company had to sell the products to the police who go out to work on duty.
During the winter in 1972,a important criminal case occurred in Japan.Many TV stations of the country made live broadcast one after another.The audiences saw the scene on TV.After that night,lots of people knew the existence of bowl-type instant noodles.And the sales volume increased very much rapidly.A gusty accident unexpectedly became a advertisement.And that wasn’t expected by the Nissin Company.
At present,instant noodles have been spread all over the world and have made great contributions to people’s daily work and life.The efforts that Momofuku Ando and his company have done are worth being remembered in our hearts forever.