Another type of potato chip, notably the Pringles and Lay's Stax brands, is made by extruding or pressing a dough made from ground potatoes into the desired shape before frying. This makes chips that are uniform in size and shape, which allows them to be stacked and packaged in rigid tubes. In America, the official term for Pringles is potato crisps, but they are rarely referred to as such. Conversely, Pringles may be termed potato chips in Britain, to distinguish them from traditional "crisps". Munchos, another brand that uses the term potato crisps, has deep air pockets in its chips that give it a curved shape, though the chips themselves resemble regular bagged chips.
An additional variant of potato chips exists in the form of "potato sticks", also called shoestring potatoes. These are made as extremely thin (2 to 3 mm) versions of the 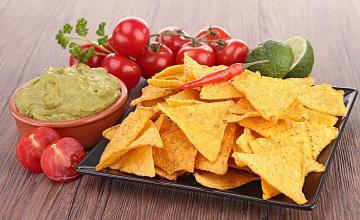 popular French fry, but are fried in the manner of regular salted potato chips. A hickory-smoke-flavored version is popular in Canada, going by the vending machine name "Hickory Sticks". Potato sticks are typically packaged in rigid containers, although some manufacturers use flexible pouches, similar to potato chip bags. Potato sticks were originally packed in hermetically sealed steel cans. In the 1960s, manufacturers switched to the less expensive composite canister (similar to the Pringles container). Reckitt Benckiser was a market leader in this category under the Durkee Potato Stix and French's Potato Sticks names, but exited the business in 2008. In 2014, French's reentered the market.
A larger variant (about 1 cm thick) made with dehydrated potatoes is marketed as Andy Capp's Pub Fries, using the theme of a long-running British comic strip, which are baked and sold in a variety of flavors. Walkers make a similar product (using the Smiths brand) called "Chipsticks" which are sold in ready-salted and salt and vinegar flavors.
No matter what kind of flavor and what kind of shape of potato chips, Gelgoog’s Potato Chip Production Line can make out. For this machine, the finished size and shape can be designed according to the mould on the forming machine. One set of mould roller can produce one size. If you need different shape and different size, we can customize the mould for you.