Our company produces cereal puffing machine with high efficiency, large output, is four to five times than the traditional extruder, and it has a wide range of use, suitable for corn, rice, millet, sorghum and other cereals, but also can be used as nuts openings, such as peanuts, beans, pistachios and so on. 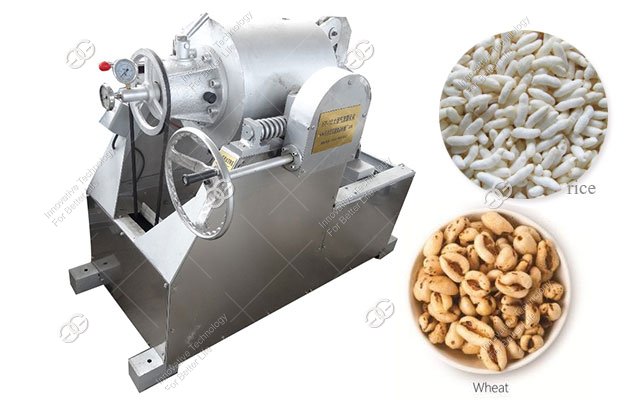 
Main Function of Puffing Machine
1. Aggregation effect: in the process of expansion, food or feed ingredients can be closely combined and condensed into a discrete pieces.
2. Dehydration: in general food or feed expansion process, the water content on the basis of the original will be lost 4%-7%.
3. Expansion effect: extruder operating conditions and configuration can control the pet feed and aquatic feed density (such as sinking or floating).
4. Gel effect: expanded cooking can make starch (from various sources, such as tubers or grains) from various sources, such as tubers or grains.
5. Mixing effect: in the process of the expansion, all kinds of extruder has a variety of screw can be used to choose, can make the extruder to produce the desired amount of mixing.
The automatic cereal puffing machine can be expanded rice, millet, wheat, barley, buckwheat, corn, sorghum, buckwheat, beans and so on. Is currently the puffed food manufacturers is one of the essential equipment, if you are interested in the product, please contact with [email protected] for machine price and details.