How does the chef cook French fries

2016-12-19 by s
In China, French Fries most sold in western restaurant, especially in western fast food restaurant, there are few French Fries sold in Chinese restaurant. Now, Gelgoog will share with you how the chief in French restaurants cook French fries.
Firsty, peel potatoes, then cut lengthwise into 1/3-inch-thick sticks, submerging in a large bowl of ice water. Rinse potatoes in several changes of cold water in bowl (more ice isn't necessary) until water is clear. Drain in a large colander.
Spread potatoes out in a single layer on several layers of kitchen towels to drain, then pat dry. 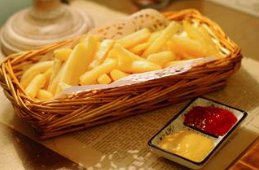 While potatoes are being rinsed and dried, heat 2 inches oil slowly in a 5- to 6-quart pot over medium-low heat until thermometer registers 300°F.
When oil is ready, increase heat to high and fry potatoes in four batches, stirring occasionally, until just cooked through but still white, about 3 minutes. (Adjust heat to keep oil as close to 300°F as possible and return oil to 300°F between batches.) Transfer fried potatoes with a slotted spoon to a baking sheet lined with dry towels to drain. When all potatoes are fried once, cool potatoes to room temperature, about 30 minutes.
Reheat oil over medium-high heat until thermometer registers 375°F. Fry potatoes again in four batches, stirring, and adjusting heat to keep oil as close to 375°F as possible, until deep golden, 3 to 4 minutes. (Return oil to 375°F between batches.) Transfer with slotted spoon to dry towels to drain briefly, then season with salt and serve immediately, with sauce(s) for dipping.
In China, most restaurant fried Frozen Potato Chips which produced by Potato Chips Production Line. The flow chart of potato chips processing plant is Raw Material Mixing----Dough Rolling----Dough molding---Air Drying---Frying---Removing Excess Oil----Air Drying Deoiling—Flavoring.
Maybe the potato chips made by production line will not delicious as well as it made by French chef, it also good taste and popular all over the world.