Have you ever seen Fish-Shaped Cones

2016-12-19 by sherry
Fish-shaped ice cream cones have been inundating our Instagram feeds for a while now, so what's the fuss about? The fish-shaped cones are known as Taiyaki, which literally translates to "baked sea bream." They are sweet cakes typically filled with red bean paste made from sweetened azuki beans. Alternatively, taiyaki can be filled with custard or chocolate.
Although these treats have been a Japanese tradition for 100 years, they've recently become popular in the United States, specifically in New York and California. Earlier this Summer, Uji Time opened in Berkeley, CA, and last month, Taiyaki NYC opened in Chinatown. Both 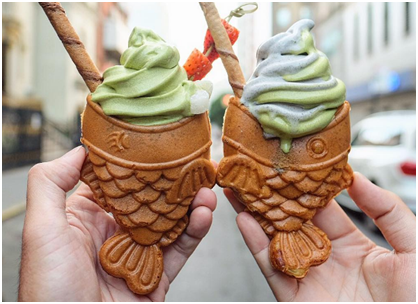 locations have turned the cakes into cones with a large, open mouth using a special waffle-like griddle, perfect for scoops of ice cream! As a nod to the classic preparation, the fish's tail is filled with custard or red bean filling before being topped with soft serve or ice cream scoops, including vanilla, chocolate, black sesame, and matcha. Scroll on to see the delicious snaps from both Taiyaki NYC and Uji Time as proof that it's always ice cream season.
Now, Gelgoog trying to make any kinds of shape of ice cream corn , but the most popular ice cream corn making machine is Full Automatic Ice Cream Cone Baking Machine. The whole machine is controlled by the computer intelligent system with super huge LCD screen. The machine operating status is shown in the graphics whose interface can reflect the communication between the operator and the machine. The preference was protected by the password which can prevent the operation by mistake. Output is adopted the low noise and undisturbed technology. The practical and new type patented churning system improve emulsification of the base; The rectangle design of the pot can save more space. Closed cleaning water source help to work efficiently and sanitarily.