2016-12-20 by sherry
Yunnan crossing-the-bridge rice noodles, with an over 100-year history, is one of the best-known Yunnan snacks, and was listed as an intangible cultural heritage of Kunming city in 2008. 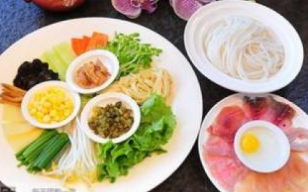 It is composed of three parts: stewed chicken or goose soup, slices of pork, fish and other vegetables, and rice noodles.
People who have never tried these rice noodles sometimes scald their lips, beacuse the soup is non-smoking but boiling, so they drink the soup too quickly.
The soup is boiling in a misleading, calm no-smoking way, its floating thick chicken or goose oil prevents steam and makes us try to taste it too soon. It is used to boil the raw meat slices and vegetables before adding cooked rice noodles .
There are many stories about the invention of the dish.
One story is that during the Qing dynasty (1644-1912) there was a scholar who studies on an island of Mengzi city, Yunnan province. His wife made his favorite food, rice noodles, for him every day.
But the noodles always got cold when they were sent to the island. One day, the wife found that the chicken soup she sent to her husband was still hot. She soon figured out that the thick oil on the chicken soup preserved heat. She also found that the rice noodles tasted better if not boiled together with the chicken soup.
The smart wife therefore started bringing separated chicken soup, rice noodles and other ingredients to the island and combined them only after arriving at her husband's place.
The rice noodles tasted so good that the cooking method soon spread across the city. Local people named the dish "crossing-the-bridge noodles" in memory of the wife as she had needed to cross a bridge to the island every day.
Rice noodles can produced by Automatic Rice Noodles Making Machine, this equipment adapts the great situation that our country is carrying out the reinforced, handling for the rice and the flour. It can meet the need that people require the balanced nutrition. Meanwhile it can avoid the following features: high nvestment in importing the equipment and the high freight. It has the following features: high degree of automation, saving energy. It takes the rice, millet, black rice, buckwheat and all kinds of corns and cereals as raw material and makes the vitamin, protein and mineral composition mixed, extruded, then it can become the rice appearance again. This process is easy and convenient and has the same edible method as the natural rice.