Various of noodles in Asia

Asia's noodles is in varied forms, Have you taste all of them ?
Cellophane Noodles
Often referred to as glass or bean thread noodles, cellophane noodles are composed of mung bean starch and are used in a variety of dishes across Asian cultures — including soups, salads, spring rolls, and the like — where their mellow flavor, glossy appearance, and springy, slippery texture can shine. Sold in a dried, brittle form, they're often reconstituted by soaking in hot water — no boiling necessary.
Egg Noodles
Sold in a variety of thicknesses and in both dried and fresh form, egg noodles are based on an alkaline egg and wheat dough and are common throughout China. These chewy, mellow-flavored noodles are a component of many dishes including lo mein, chow mein, and dan dan mian and are also fried and used as a garnish for some Chinese-American dishes like Chinese chicken salad.
Vermicelli
Though they share a similar dainty size and shape, vermicelli should not be confused with cellophane noodles. Mild in flavor, opaque, and tender, these white no 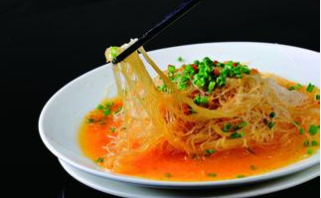 odles are generally sold dried and are a key. where they're boiled, then typically served with a sweet rice-wine-vinegar-based dressing, nuts, herbs
, and meat.
Sweet Potato Noodles
Sweet potato noodles,a chilled salty-sweet noodle dish — are made with sweet potato starch and are similar in appearance to bean thread noodles. Sold dried, these light-gray, brittle noodles cook up exceptionally fast and are prized for their glossy, translucent appearance and firm, chewy, slippery texture once cooked.
Ramen:
While ramen may have a reputation as a cheap, dorm-food staple stateside, in Japan (and increasingly throughout the States) it's a much-revered noodle soup dish that comes in a vast range of varieties — heck, Lucky Peach even devoted its inaugural issue to the subject. Sold fresh or (more commonly) dried, alkaline, wheat-based ramen noodles transform from brittle (in dried form) and crisp to tender and slightly chewy when cooked.
All above noodles can produced by Gelgoog’s Noodles Production Line, the noodles made by this line is edible, convenience, nutrient rich, can staple food and fast food health care food.